Some Thoughts For Fall

Septemeber has arrived. And with it comes the cooler weather (sooner than I expected, but not unwelcome), the return of the dreaded footbal season, cold season, pre-school, and soup.
Josh and I were on a walk with the boys the other day, and we were talking about the weather, and I realized (again) how much I LOVE Autumn. It seems that every year, I forget about my favorite season, and every year I vow not to. Then it rolls around again, fally as ever and I am struck by my affection for the crisp air, the crisp apples, the crisp... I can't think of any other crisp things I like, besides apple crisp, but I already said apples.
Fall brings out my lesser used domestic desires. Like the ones to make elaborate soups, and breads and other warm comfort foods from scratch. Or, indoor crafty things. At homegroup last week, I launched into my plans to aquire a sewing machine and teach myself how to sew and begin making wonderful home funishings. My very good friend, Karen cut me down to size with, "Don't you think you have enough hobbies? Do you really need one more?" She's like the string on my kite. Needless to say, I have abandoned (for now) the sewing machine adventure.
Fall has also brought a new change to our house. Today was Jackson's first day of Pre-school. I did not cry. Neither did he. Noah did, but only 'cause I didn't get him out of the car fast enough. It was a sucessful day at school. He had fun, didn't punch anyone (as far as I know), and I had an extra set of clothes packed in his backpack, which I hoped he wouldn't use, but did. He towers over the other kids, but to me he looked so small. it makes me wonder if I'll cry when Noah goes to school. Prob'ly not. It's not my style. 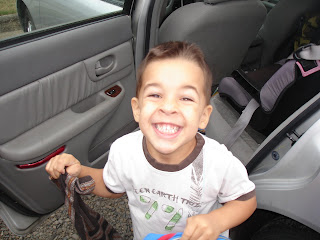 There were other big changes happening all around me in the last month and I found myself all riled up over them. I spent a couple days in a terrible funk, and then (duh!!!) I went to the Lord. I had been complaining about all the things in my life that change when I don't want them to, and letting Him know what I thought of His actions, when I realized that I'm not the boss of Him. That was sort of huge. See, I'm the boss in my house. So if there are changes to be made, they go my way and in my time. Not to say that Josh is the un-boss, but kinda. So, to look at the things around me that I always expected to always stay the same, and know that that wouldn't always be, was a little scary. But I think the Lord spoke to me. I was reminded that He DOESN'T change. He's always faithful. He's constant. It's not the deepest concept to dig for, but I needed it right then and it was good.

Here's a picture of us at the beginning of a wedding this summer. I had this great plan to have candy and crackers at hand to keep the boys quiet during the ceremony. That didn't work out. Maybe we'll get to see the video. But we all looked pretty good. Note, if you will, my "just returned from Hawaii" glow. 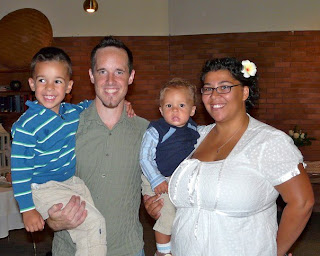